an estimated 5.8 million Americans of all ages are living with Alzheimer’s dementia.  By 2050, this is expected to be 14 million This number includes an estimated 5.6 million people age 65 and older and approximately 200,000 individuals under age 65 who have younger-onset Alzheimer’s.

Harvard: Inflammation is the unifying link between all diseases – Mental & physical.  Oxidative stress, if uncontrolled leads to inflammation.

Quick review of oxidative stress  (I have many articles here to check out on oxidative stress). An imbalance in our redox state  as a result of increased free radicals and a decrease in antioxidant defense.  Free radicals are molecules that contains one or more unpaired electrons in its outer shell, trying to rebalance itself by snatching another molecule’s electrons. This imbalance causes a significant decrease in the effectiveness of antioxidant defenses, such as glutathione.

There are many causes of oxidative stress, both endogenous & exogenous, and unfortunately in unavoidable. Again, please refer to my many other articles here.

Pubmed:  Tissues and organs, particularly the brain, a vulnerable organ, are affected by ROS due to its composition. The brain is largely composed of easily oxidizable lipids while featuring a high oxygen consumption rate. In other words – the brain is an easy target to suffer the ravages of inflammation.

Now: If we all learned about oxidative stress, how to minimize it – maybe we could prevent a lot of these cases of Alzheimer’s – and the other top diseases killing us?

A 2018  human study published in the Journal of Alzheimer’s Disease, showed glutathione to be significantly depleted in Alzheimer’s patients compared to those without Alzheimer’s. Glutathione, referred to as the master antioxidant,  is accepted as  the omnipotent  anti-oxidant that protects the brain from free radical damage. Researchers are hoping  these findings will give us another measure to use when diagnosing potential for the advancement of Alzheimer’s disease or recognizing those that are in the early stages of advancement.

Glutathione deficiency is also seen in immune function issues, and is very much implicated in the aging process, DNA damage, and of course is a huge cause of oxidative damage. Glutathione also plays a key role in energy production and methylation, two integral processes at the core of normal cellular function. Methylation  is an important part of many  cellular repair functions, including the recycling of glutathione and detoxification.

Heart disease, stroke, cancers, diabetes…. all of our top killers are,  oxidative stress is a major factor in all of them. Learning how to properly control oxidative stress, is really what a proactive lifestyle is all about.

There are other ways to increase glutathione from within your own body, by as much as 300%.

There is a pathway in the body that unfortunately decreases with age, but now due to medical technology, can be activated. 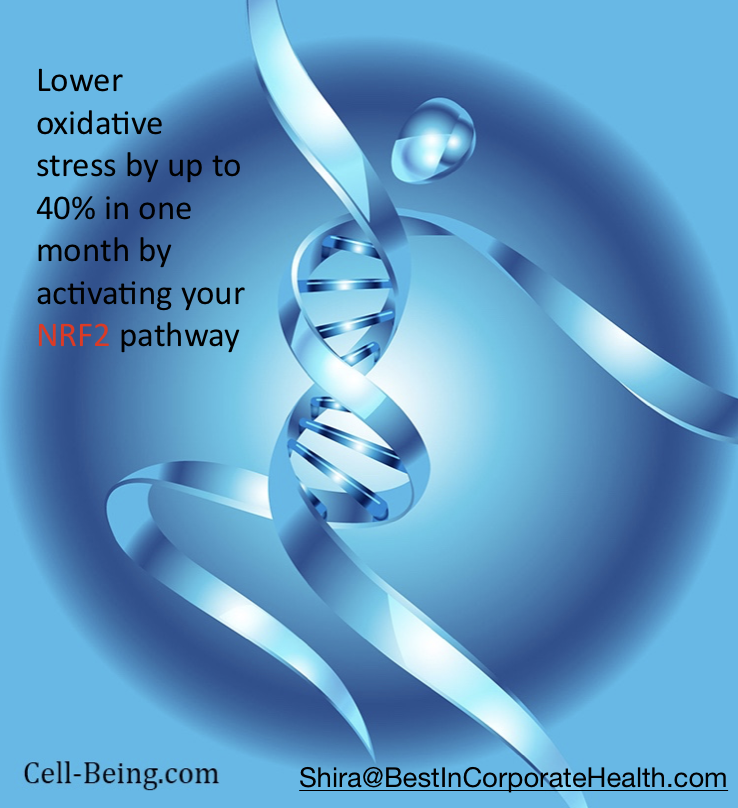 Complicated – but simply, our inner NRF2 pathway triggers our antioxidative genes. It is completely accepted the NRF2 pathway  lowers oxidative stress, however, it also dramatically decreases with age. The NRF2 powers provide a million times the antioxidative power. There are hundreds of studies, peer reviewed studies that prove the incredible power of activating our NRF2 pathway. The truth is – there really is only one way to activate the NRF2 pathway – and that is with the natural supplements that have been studied, proven and accepted by our respected medical institutions.

Washington State University refers to these NRF2 activators as the “the most extraordinary therapeutic and most extraordinary preventative breakthrough in history of medicine.” These activators are recommended by the American Heart Association and have earned the accolades of hundreds of peer reviewed studies.

Our cells are forced to confront the  daily cacophony of life, from oxidative stress. We have the ability to orchestrate the musicians, our cells, into the symphony of life. Contact me to lower oxidative stress by up to 40% in the first month. My Bonus for the corporate world – free educational webinars on understanding oxidative stress and inflammation – and really managing and preventing disease.  email me for details.

Oxidative Stress at the Root of Disease

Shira@BestInCorporateHealth.com.    Set Up a Call

The supplement like a flu shot against oxidative stress…..

Why are we not controlling chronic illness? We must control the wildfire of inflammation and lower oxidative stress. We know oxidative stress is at the root of chronic illness such as cancer, heart disease, depression, arthritis, stroke, diabetes. Inflammation ages us and leaves us susceptible to disease….We take a flu shot to prevent the flu – one simple supplement to lower your oxidative stress by as much as 40%.    7 patents, 24 peer reviewed studies on pubmed, accolades from American Heart Association, Mayo Clinic, National Institute on Aging….Washington State: “may well become the most extraordinary therapeutic and most extraordinary preventative breakthrough in the history of medicine.”

There is an estimated 750 Billion dollars in U.S. health care waste every year. Our many technologies assure you are not contributing to that $750 billion. Health technology serving the continuum from prevention through chronic illness management.